One question I keep getting asked is, “Why did you create LIFEies?” There is a three part answer: First, was for promotion. I wanted to let people know about my book, The Fantastic Life.  Click here if you are interested.

Second, sharing interesting and motivational articles is something I have been doing with my kids since they could read, so I do it naturally.Third, I love learning.  Below is a great article about Steve Kerr, the coach of the Golden State Warriors NBA Basketball team.  Last season, Steve asked his staff to send him articles they found interesting that were NOT about basketball. Read below to see Steve’s view on NBA basketball and more important, our lives.   Live your life.  Keep learning and reading.

Rule #1 from my book The Fantastic Life: Know Your Story
There are two stories to every person, who you really are and who you show the world. The great news is you are in control of both of them. We learn and grow through what we read and enjoy as well as what we share with others. So ask yourself, who am I? And how do I want others to perceive me?

The Golden State Warriors coach is about more than just X’s and O’s; what Big Bird and Al Pacino have to do with the NBA playoffs 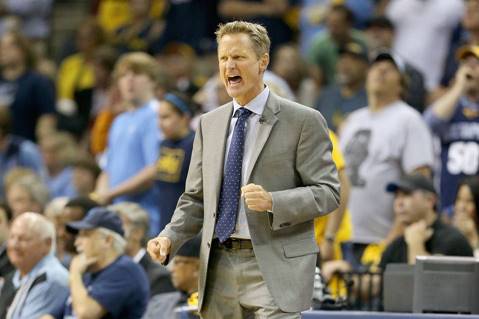 Golden State Warriors coach Steve Kerr had some unusual reading sent his way this week as he studied for the most critical game of his young coaching career.
Kerr’s team, which won a franchise-record 67 games this season, was suddenly down two games to one to the Memphis Grizzlies in the Western Conference semifinals. Another loss Monday would have put the Warriors on the brink of elimination. This game, he said, was Golden State’s “moment of truth.”

It was around this pivotal point when the coach of the NBA’s best team was assigned a story about Big Bird.

This, as it turns out, was exactly what Kerr wanted when Golden State hired him before this season. He made a peculiar request at the time: Kerr asked to be updated with a reading list that had absolutely nothing to do with basketball.

Golden State’s public-relations staff has complied by clipping new material for Kerr all year long. His reading list is eclectic. So far, it includes a New Yorker profile of Al Pacino, an Economist obituary of Ronald Reagan’s astrologer and an Atlantic essay about living in a dumpster, sating a curiosity that ranges from the scientific (aging experiments) to the serious (wrongful incarceration) to the strange (the band Hall and Oates suing the granola manufacturer of Haulin’ Oates).

The long form stories have become shorter as the season has gone on, but Kerr is still sent several stories every week that he wouldn’t have seen otherwise. He reads in print, not on his iPad, and he prefers double-sided pages to save paper.

It is a habit that has continued even in the playoffs. This week, before the Warriors’ 101-84 win on Monday that tied the series, Kerr’s aides passed along an emotionally wrenching story about how the man behind the Big Bird character comforted a dying boy whose last wish was to talk to the prominent resident of “Sesame Street.”
“There are other things in life besides basketball,” Warriors owner Joe Lacob said, “believe it or not.”

It’s unclear if Kerr has had time to read about Big Bird yet, though he has his reasons for keeping up on outside reading. Those close to Kerr describe a worldly person who simply wants to learn something new. But what he reads also shapes the way Kerr coaches and brings about the work-life balance that so often slips away for people with stressful jobs.

“One of his best attributes is that he likes to remind the players that there’s more to life than basketball,” Warriors general manager Bob Myers said. “Whatever is going on with our team or his coaching staff is not the most important thing going on in the world.” Kerr wasn’t available for comment for this story. 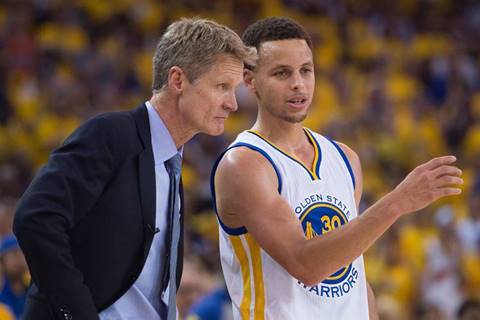 Kerr helped lead Stephen Curry and Golden State to a 16-win improvement over last season, and the best record in the NBA.
PHOTO: KYLE TERADA/REUTERS

It is a quirk of a 49-year-old rookie coach whose entire basketball career has been uncommon. Kerr, who looks like a native Californian, was born in Lebanon and grew up in the U.S., Europe and the Middle East. His father was an academic scholar of the Arab world who was serving as the president of the American University of Beirut when he was killed in 1984.

Kerr was a freshman at Arizona at the time. He went on to become an oddly successful player. He was a second-round draft pick who won five NBA championships and played 15 seasons despite scoring less than almost anyone who hung around the league as long as he did.

Until this season, Kerr had done almost everything one can do in the NBA except coach. After his playing career, Kerr ran a front office as the Phoenix Suns’ general manager, and he had unparalleled access to team strategies as a Turner Sports broadcaster.

But he came back to the court here after Golden State’s brass made the audacious decision last season to fire coach Mark Jackson after a first-round loss. Kerr, meanwhile, was quietly preparing for a return. He wasn’t only picking the brains of the NBA elite as a broadcaster. Kerr was also busy stockpiling plays, setting up meetings with people outside of basketball and swapping links to interesting stories.

“You could be around Steve for 30 seconds,” said Miami Dolphins executive Mike Tannenbaum, Kerr’s former agent, “and realize his affable demeanor belies an undercurrent of a world-class competitor who just wants to kick your a– in everything he does.”

What he has done with the Warriors is remarkably different from the rebuilding that awaits most rookie coaches. Kerr wasn’t asked to make an awful team decent. He was hired to make a pretty good team great.

Kerr’s coaching creativity helped lead to a 16-game improvement over last season. He hired a staff of sophisticated assistants who helped overhaul the offense to suit stars Stephen Curry and Klay Thompson. He sat Andre Iguodala, who had started every game of his career, so he could anchor the second team. He built the league’s best defense around the undersized but agile Draymond Green.

Kerr is still tinkering. His counterintuitive masterstroke may have come Monday when he had Andrew Bogut, a 7-foot center, defend Tony Allen, a 6-foot-4 guard, in a mismatch that mystified Memphis. 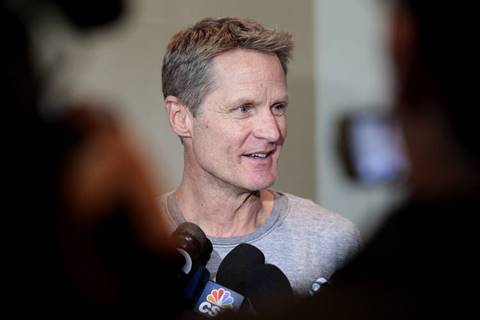 These decisions are informed by a perspective that is rare in the insular world of the NBA. It is epitomized by a reading list that is now hundreds of pages long. The stories are chosen by Warriors PR staffers and can be about virtually anything. “I don’t know that it’s a part of his strict daily schedule,” said Nick U’Ren, his special assistant and Golden State’s manager of advance scouting, who prints out a copy of the stories for himself. “But I know that he reads them all.”

Golden State’s executives say Kerr’s equilibrium helps explain the team’s consistency. “I think perspective is important,” he said in a radio interview last week. “I try to mention it as a coach occasionally—just remember that it’s still a basketball game.”

Kerr himself said this week that he told his players to put their phones away, watch a movie or read a book—Curry went to Beale Street for catfish with his teammates—instead of worrying about what might happen on the court. “Your coach could be so fixated on the game and your team,” Myers said, “that it can be oppressive at times or hard to take for an entire season.”

Kerr’s bosses haven’t sent any stories his way yet. But the word of his reading list has circulated around Golden State’s front office.

“I think it’s a really good idea,” said Lacob, who is a Silicon Valley venture capitalist, “and I think everyone could learn from it.”