As the real world hits you, and we all know it will hit you over and over, resilience and grit become some of the most important skills to develop.  AND yes, you can develop them.

Below is a nice article from the Wall Street Journal.  Read it and start working on developing your resilience skills today.  Having grit and resilience will bring you good stead all the days of your life.

Here are a few ways to start:

–No negative self-talk.
–Learn deep breathing exercises (sounds like meditation–this keeps coming up. Maybe we should all do more of it).
–Find a sanctuary (you all know backpacking is mine).

You can read some more below.  Grit will be a topic I discuss in the future as well.  As I get older, and see the next generation growing, I think grit will be a foundational skill we will need to more fully develop.

Rule #15 from my book The Fantastic Life: Take the Decision out of the Moment
Developing grit now will give you the mental toughness you need when life hits your hard. Be prepared by cultivating your resilience ahead of time. This trait will see you through the rough patches in life.

Why Resilience Is Good for Your Health and Career 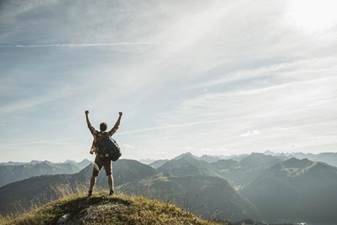 Resilience is often defined as the capacity to adjust to change, disruption or difficulty and move on from negative or traumatic experiences in a positive way.

Studies find people with the most resilience tend to be more productive, less likely to have high health-care costs and less often absent from work. Now, some employers are offering programs to help employees become more resilient. They are providing webinars and group coaching to teach skills and habits that help people stay focused and functioning during stressful times at work or home.

Many such programs in use in the military, police forces and school systems are related to a movement called Positive Psychology, which focuses on increasing positive emotions, putting negative emotions in perspective and learning to thrive despite challenges.

Royal Dutch Shell says a resilience-training program it started five years ago and has offered to employees in over 50 countries “seems capable of enabling a sustained change that extends beyond improved resilience into broader human performance.” The company points to data showing positive effects persist up to four years.

A recent review of more than a decade of studies, led by researchers at the University of Nebraska and published in the Journal of Occupational and Organizational Psychology, found resilience training in the workplace can help improve employees’ mental health and subjective well-being, and offer wider benefits in social functioning and performance.

While some people have natural coping skills, “we know that resilience can be developed, and you can give people the resources to build within them the power to bounce back from adversity,” says Fred Luthans, management professor emeritus at the University of Nebraska who is co-author of “Psychological Capital and Beyond,” a book about applying positive psychology science at work, and who is developing webinars on resilience training.

James Avey, an assistant professor of management at Central Washington University whose research includes work with sales professionals experiencing anxiety and depression as a result of high customer rejection rates, says coaching is most helpful for people who are initially low in resilience. “Even making this person normal or average on resilience can have an extremely high life impact,” he says.

HealthPartners, a Minneapolis nonprofit with seven hospitals, 55 primary-care clinics, 1,700 doctors, 22,500 employees and a health plan serving 1.4 million medical and dental members, offered emotional resilience group coaching to 2,200 headquarters employees in 2013 and 2014, including emotional-resilience training for about 2,000 managers. Other programs for some staffers include online virtual coaching on topics such as positive thinking, stress management and healthy sleep.

In a study published in the January/February issue of the American College of Sports Medicine’s Health & Fitness Journal, researchers at HealthPartners reported that among a group of employees who participated in three one-hour emotional-resilience sessions, well-being persisted at least one year later.

Karen Lloyd, co-author of the study and senior director of behavioral health and resilience at HealthPartners, says results were measured using an online health assessment that includes questions about lifestyle, such as diet and exercise, and quality-of-life measures, such as how often participants missed work due to illness; results are summarized with a 1000-point score. The average score for certain lifestyle factors improved by 10 points among coaching participants compared with no significant improvement for a group that didn’t participate; life and job satisfaction scores improved as well.

Traci Kubisiak, a solutions consultant in HealthPartners’ health-plan business, says she was intrigued by a flyer for one of the coaching sessions, “Bringing Your Best Self to Work.” In addition to work and mothering two daughters, ages 7 and 9, Ms. Kubisiak is a caregiver for her ill father and says her life often felt like “frenzy.” One day, while sitting in a meeting while her phone flashed that her father’s nurse was calling, she realized, “I needed the whole concept of resilience.”

The three-session program included lessons in building the habit of being fully present in the moment, putting some play time into each day and cultivating an “attitude of gratitude,” including writing down three things she was most grateful for, even mundane things like getting a good parking spot. She learned to develop rituals to separate home from work, such as taking off her ID and putting her parking permit away. “Life isn’t going to get less stressful,” she says. Coaching led her to think about “how can we bend without breaking, so we don’t snap in two.”

BUILD UP YOUR RESILIENCE

Resilience coaching teaches skills that help people adjust in a positive way to change or difficulty while continuing to function at home and work. Some tips, from HealthPartners:

Co-author Abigail Katz, who does research and analytics for HealthPartners, says even employees who are thriving can suddenly find themselves struggling when a stressor such as family illness strikes. Such events are linked to lost productivity and higher health costs. While employers are interested in cost savings, Dr. Katz says , they also want to promote “the concept of well-being, where employees are bringing their whole self to work.”

Anand Shah, a family physician at HealthPartners, says he once struggled with feelings of burnout after working as one of just a few doctors in a small town. After joining HealthPartners, the company sponsored his participation in seminars on resilience through the nonprofit Center for Courage & Renewal. He found they helped him listen better to patients and establish more-personal connections. He appreciated the guidance on maintaining balance between life and work, and suggestions to find a brief “sanctuary” or tranquil space to take a breather during the day.

Dr. Shah now leads coaching sessions for care teams at HealthPartners clinics, on staying “focused and resilient” amid the stress of, say, learning new medical records systems. Sessions are voluntary, he says, and some doctors have declined, saying they can manage alone. But when doctors, nurses and other clinicians work on resilience as a team, he says, “they can help reinforce each other.”