Today’s message is simple: take some walks. Without your phone. We all need to get out of the Matrix daily.

Just a reminder to everyone (and me) that we need to get away and experience life as it should be.  Walking is a simple way to accomplish this…

And to get a little exercise.

Rule #6 from my book The Fantastic Life: Stay Out of the Matrix
There are so many easy ways to escape the Matrix. Get out of your comfort zone, your daily routines, your ingrained habits, and trying something new that pushes you. 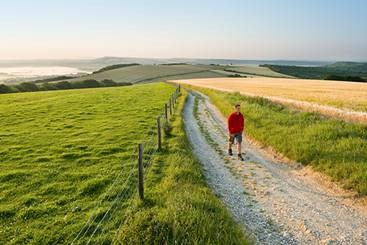 Feeling overwhelmed by the constant onslaught of the digital age? Detox by making
long walks a part of your travel lifestyle. (Photograph by BANANA CAKE / Alamy)

The digital detox bandwagon is growing these days (here’s but one shred of evidence). People are increasingly looking for vacations that offer a break not just from the daily grind at home or at the office, but from their smartphones.

Quick tip: It’s not about where you go.

Once we reach a destination, we have to make the same decisions as we do back home. To tweet, or no?

The real way to disconnect–wherever you happen to be–is what writer Rebecca Solnit calls “the most obvious and the most obscure thing in the world.”

People have been bipedal for about two million years, yet only the poor and the pilgrim endured long distances on foot until Romantic poets like William Wordsworth took to the outdoors seeking freedom and inspiration–and then sat down and wrote about it. Eventually they made “walking for walking’s sake” sort of hip.

Copenhagen to the mud-caked rambles across the English countryside documented in Pride and Prejudice–were often deliberate, even radical, acts of rebellion against the smog, squalor, and disease festering in the cramped neighborhoods that served the factories. 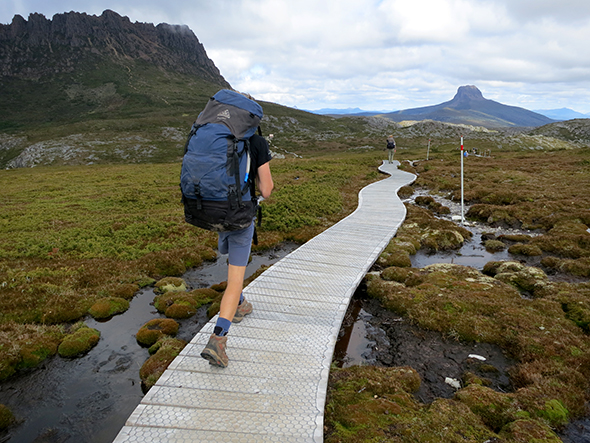 Sometimes I wonder if our growing need for “digital detox” is simply the modern redux of those 200-year-old poems. Is our relentless connectivity becoming, in its own way, as oppressive as life-spans shortened by choking pollution two centuries ago?

Anyway, I think taking longer walks on trips can help.

It’s not just that walking is healthy. Yes, it can take you out of cell range–in some places–but when done in longer doses, this everyday activity disconnects us. It yields a bigger payoff, too.

I’d taken walking vacations before, but I began to fully appreciate this notion a couple of years ago in the south of France. After spending several days going village to village by foot, often in complete isolation, I sat sipping red wine outside a roadside tavern. Before too long two French “rednecks” pulled up in a mud-splattered truck and yelled at their dog before a backdrop of green mountains glowing in a golden sunset.

It was quite the moment! And not just because of those dangling mullets. Why did I feel connected to this place in a deeper way than if I had come by train, rental car, or tour bus? It was because I had walked there.

Walking is the only mode of transport where we keep a foot on the ground. We just glide over it on bikes or in cars. And running, which puts us airborne as much as 40 percent of the time, distracts by being taxing. (Maybe roller-skating counts, though? Discuss.) That constant physical connection to the earth–as we go from points A to B to C–is something, I’m surprised to admit, that’s beginning to mean more and more to me.

In her epic book Wanderlust: A History of Walking, Solnit calls walking a rare occasion when “the mind, the body, and the world are aligned.” As we walk roughly three miles an hour, she reckons that our minds work at the same speed. If that’s true, then, as she correctly concludes, “modern life is moving faster than the speed of thought, or thoughtfulness.”

Lucky for us, walking long distances is easier than it used to be. Formerly pedestrian-hostile cities are even starting to develop walking infrastructure. New York has its High Line success story, but perhaps more telling is a place like Atlanta, home to a pitiful “Walk Score” of 46 (worse than L.A.’s). The city’s BeltLine, the idea for which sprang from a Georgia Tech master’s thesis, represents one of the biggest rail-to-trail projects in America, which when completed should result in more than 20 miles of walking and biking trails that connect Atlanta’s neighborhoods and green spaces.

That’s encouraging news considering Americans, in general, aren’t all that great at walking.

An excellent investigative series Tom Vanderbilt put together for Slate cites a study that shows how British kids double the daily steps of an average American. Admittedly, Britain has smaller-scale city plans (and a grander walking tradition), but car-culture nations like Canada and Australia are apparently walking twice as much as Americans, too. Is it because they call it “walking” while Americans use the more labor-suggestive “hiking”?

Recently I visited Australia, and I felt I had to put special emphasis on my feet in a land that still celebrates the Aboriginal walkabout and the animist belief in songlines, a fascinating oral tradition that connects landscape in a song that, when sung, can guide a person across even the most forbidding of places. In his book The Songlines, Bruce Chatwin describes the country as a “musical score,” linked by “a spaghetti of Iliads and Odysseys.”

I picked Tasmania’s Overland Track, and spent six days going hut to hut, using gnarled tree roots as stepping-stones to cross muddy rivulets and trying my best to avoid stacks of wombat dung. Along the way I’d pause to photograph waterfalls or snacking wallabies, or to rest my aching knees while a torrential downpour passed.

But then, all of the sudden, the sky would clear, revealing a rainbow arcing up to the trailhead from a lake at the base of the mountain.

A beautiful scene anyone would appreciate. But I knew it wouldn’t have meant as much if I had just driven up Mount Olympus (the one in Tasmania). Yes, I was sore and, let’s be honest, itching to check e-mail, but witnessing that sight after trekking all those miles on foot inspired me to sit and write a celebratory haiku:

All can see this place.
But I walked here, so the view
Feels even bigger.

Getting somewhere–anywhere–by our own sweat and blisters has a way of doing that. Even in the rain. And so wherever I go next, my first question will be, “Where can I walk?”