The best way to stay out of debt is to not go into it in the first place.  Below is a Wall Street Journal article on what is happening to baby boomers in retirement and the tough decisions they are now having to face due to debt accumulation over the years.

Here are a few great quotes on debt:

–Paying with cash keeps you honest. Paying with a credit card is a lie told to your future self.

–Debt lets you buy items you can’t currently afford. This is known either as “consumption smoothing” or “sticking a finger in your own eye.”

–“Rather go to bed without dinner than to rise in debt.” -Benjamin Franklin

Rule #10 from my book The Fantastic Life: Stay Out of The Gap

The gap separates you from where you are today and where you want to be. Debt pushes the gap wider and wider, further keeping you from your goals. Stay out of the gap by staying out of debt.

With $15 Left in the Bank, a Baby Boomer Makes Peace With Less

Kathleen Wolf never dreamed of spending her retirement in Iowa.

The 68-year-old Californian had a change of heart after filing for Chapter 13 bankruptcy. Ms. Wolf was a millionaire whose fortune, built on buying and selling homes, collapsed in the financial crisis. Her bank balance fell to $15.

Ms. Wolf said her debt-repayment plan, which eventually left her with about $1,000 a month to live on, made clear she had to leave Monterey, Calif., the central-coast city where she lived. She looked online, as long as 15 hours a day, for places with a low cost of living. In August, she landed in an Iowa town of around 700.

During her nationwide search, Ms. Wolf found that life in affordable communities brought trade-offs. “These places never gentrified. They have undesirable weather,” she said. “They have no yoga classes.”

Yet Ms. Wolf’s journey from tony West Coast to rural Midwest has afforded, to her surprise, a measure of contentment, as well as counsel for the nation’s 75 million baby boomers. As a group, it is widely known they face a wider savings gap than past generations. What is less well documented is how they have piled up more debt, too.

People in the U.S. ages 65 to 74 hold more than five times the borrowing obligations Americans their age held two decades ago, according to an analysis of federal data by the Employee Benefit Research Institute, a nonpartisan, nonprofit policy researcher.

Paying it off won’t be easy. Median savings for U.S. households nearest retirement age has dropped 32% in the past decade to $14,500, according to an analysis of federal data by the Economic Policy Institute, a left-leaning think tank.

The financial crisis weakened many households through lost jobs, pay cuts, home-price declines or a combination of all three. Credit-card debt and medical bills have climbed for many nearing retirement. Some people had children late in life, pushing college tuition costs toward the tail-end of their careers.

“This is the first time where we have seen such a high degree of debt held by people at such a late stage of life,” said Torsten Slok, chief international economist at Deutsche Bank AG.

As a result, many senior citizens will either have to work longer, move to less expensive places or pare back their spending—choices that economists say are likely to put a drag on the U.S. economy. 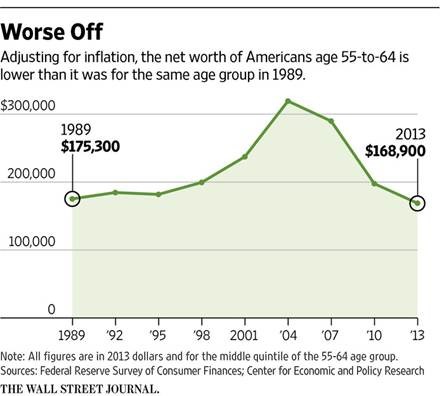 Ms. Wolf, who for years had shopped for food, clothing and luxuries without constraint, now lives within a budget.

Until recently, she said, “I didn’t understand the value of a dollar.”

Ms. Wolf was born in Sacramento, Calif., and moved to Monterey as an early teen in the 1960s, growing up around country clubs and mild weather.

She earned two associate degrees in California, trained as an auto-body painter and studied Arabic at the same Monterey institute that serves many military and federal employees. Though she lived for periods in Oregon, New York and North Carolina, she kept Monterey as a home base for most of her life.

Ms. Wolf owned several cleaning businesses before turning to real-estate investment in the early 2000s—buying, renovating and selling houses. At her financial peak in late 2005, Ms. Wolf said, she had $200,000 in an annuity. The value of her house and savings surpassed $800,000, and she had an annual income of about $85,000 from various real-estate transactions.

Against the backdrop of the real estate boom, Ms. Wolf thought she would continue prospering financially into her 80s. She bought fur coats, designer handbags, furniture and, in the 2000s, a succession of upscale cars: BMW roadster and a Lexus. She paid $17,500 to join the Spanish Bay club in nearby Pebble Beach.

“I was just playing being a rich person, I wasn’t rich,” Ms. Wolf said. “What you’re supposed to do with your money is sock it away. I didn’t.”

When the financial crisis struck, Ms. Wolf said it took her two years to curtail spending: “I had never been a budget person.” She also was grieving from personal losses, and eventually fell behind on car and mortgage payments.

Ms. Wolf turned from shopping at Whole Foods to Costco to discount-food markets. As her savings and income dwindled, she turned to the Salvation Army for dried and canned foods. Instead of making money flipping houses, she cleaned them.

Her vision worsened, but she couldn’t afford the Medicare copay for a new prescription. To read bills and legal documents, Ms. Wolf said she would press a magnifying glass to her glasses—in Tiffany frames, which she laughs about now.

Ms. Wolf was among many older residents of the broader Salinas Valley—a region encompassing more than 400,000 California residents—who saw their debt grow over the past decade, made worse by the housing crash.

Residents there over the age of 55 now have a greater debt burden than their counterparts in all but two U.S. metropolitan areas, according to an analysis of Equifax data by The Wall Street Journal. 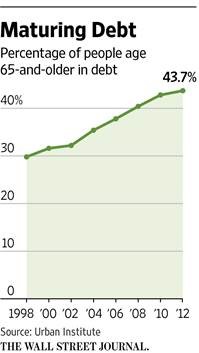 Local bankruptcy lawyer Jeremy Peck estimated that half of his clients are now 55 or older compared with only about 10% a decade ago.

“A lot of people have not been putting away,” he said. “I just see it.”

Debt levels have traditionally peaked for people in their 40s, said Meta Brown, a former senior economist at the Federal Reserve Bank of New York. That is changing. Debt held by borrowers between the ages of 50 and 80 increased roughly 60% between 2003 and 2015, while debt among younger borrowers declined, according to Federal Reserve data.

“We’re in new territory,” said Ms. Brown, who researched debt trends of senior citizens while at the Fed.

Older Americans now have more credit-card debt than younger people for the first time, a reversal from the past, according to an analysis of federal data by the AARP Public Policy Institute. And the amount of student loans held by people 65 and older is accelerating faster than the general population, the Government Accountability Office found.

There are conflicting theories about the impact of growing senior debt. Some economists say they aren’t worried because older Americans traditionally have a lower default rate than the general population. In addition, if seniors work past typical retirement ages, they will earn more wages to tax, have more disposable income and gain a few more years to bolster nest eggs.

Yet it won’t be easy for older Americans to keep working. Some 60% of retirees say they left the workforce earlier than they had planned, according to the Transamerica Center for Retirement Studies. Only one of seven of the oldest boomers—many turning 71 this year—have full-time jobs, according to a 2016 Gallup poll.

“The narrative that Boomers would continue to work forever hasn’t turned out to be true,” said Frank Newport, Gallup’s editor in chief.

Some economists say the growing number of penny-pinching older Americans—and a shrinking U.S. workforce—will depress personal incomes and purchases of everything from shoes to houses, hobbling the economy.

“It’s really hard to get out of this slow-growth trap when your labor force is barely growing,” said John Lonski, a chief capital-markets economist at Moody’s Analytics.
Debt obligations also leave seniors increasingly vulnerable to a recession or another drop in home values, economists said.

“Will they take this debt to the grave? It’s a question begging to be answered,” said Catherine Collinson, president of the Transamerica Center for Retirement Studies.

In 2015, Ms. Wolf filed for personal bankruptcy. She has since agreed to pay $650 a month until her $31,000 debt is cleared. She decided on the small Iowa town she knew only by description, where she calculated her expenses—housing, taxes, utilities—would be about 77% of the U.S. average.

“The Midwest is the only place in the country where the property is affordable.” Ms. Wolf said.

Leaving Monterey, her home of nearly 45 years, was tough. After moving out of her house, Ms. Wolf checked into a local hotel where she spent $2,000 stretching her goodbye over a few weeks.

She eventually bought a four-bedroom house for $70,000, about one-sixth the price of the least expensive one-bedroom in Monterey. The afternoon she moved in, her furniture was still en route from California. She had only a new mattress, which was delivered that day. 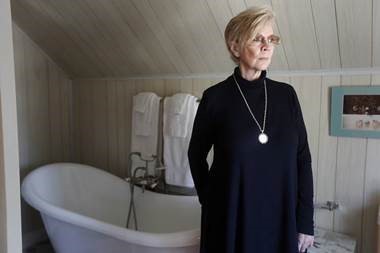 On her first morning, she drew a bath in the second-floor bathroom. “I had wanted an old-fashioned bath tub,” Ms. Wolf said. “I was taking a lovely, relaxing bath. I thought I had finally arrived. It’s over.”

Afterward, she went downstairs to the kitchen and saw that gallons and gallons of water had leaked. The ceiling was ripped; walls ballooned out and cupboards were soaked.

Ms. Wolf had to replace plumbing and the ceiling, expenses she didn’t anticipate. Even still, money from her home sale has provided her a cushion for the first time in years, she said. Property taxes are less than one-quarter of what she had paid in Monterey. She has trimmed her costs by at least half, she said.

She is eating well and bought some new clothes. With a new prescription, she has updated her reading glasses.

Ms. Wolf will seek a job soon, she said. She has noticed women her age working at local big-box retailers, and she hopes to find part-time work at one of them.

Looking back, Ms. Wolf considers herself lucky to have a second chance at securing a decent retirement. “I made it,” she said. “It was a miracle.”