Here are three that I use:

What mantras do you use?

Rule #15 from my book The Fantastic Life: Take the Decision out of the Moment

If opportunity knocks at an inopportune time, you have to be prepared to act. Mantras can help you take the stress out of the moment, and get in the right mindset to act quickly.

One Habit to Make You Happier Today

Repeating a positive phrase, or mantra, to yourself creates new pathways between neurons in your brain, conditioning you to feel calmer and healthier 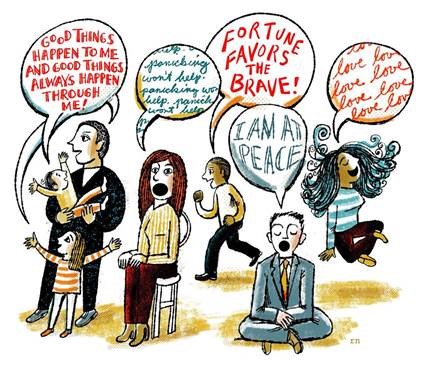 Do you have a personal mantra?

Research shows that thinking of a word or phrase that affirms our values—and repeating it over and over—produces powerful physiological changes. It can lower our cortisol levels, enhance endurance and reduce perception of effort during physical exertion.

Perhaps even more compelling, a mantra can quiet the mind. A 2015 study in the journal “Brain and Behavior” showed that silently repeating a single word led to a widespread reduction in activity across the brain, primarily in the “default mode network,” which is responsible for self-judgment and self-reflection.

Every thought we have is made up of a complex pattern of activity influenced by gene expressions, neural connections, proteins and other chemicals in our brain. The more we have a thought, the stronger that circuit grows. You can think of any two neurons as friends, says Alex Korb, a neuroscientist and author of “The Upward Spiral: Using Neuroscience to Reverse the Course of Depression, One Small Change at a Time.” “The more they communicate, the stronger their connection becomes,” he says.

This isn’t a bad thing—as long as we’re thinking thoughts that are beneficial. But too many of us beat ourselves up, ruminating on the same negative beliefs.

Mantras can create and strengthen new neural pathways that are positive and not toxic. And that can make our brain much calmer and happier.

The word mantra is derived from the verb root, “man,” which means “to think” in Sanskrit, the liturgical language of Hinduism and Buddhism. The earliest mantras appeared 3,500 years ago and were repetitive prayers or hymns. By the time meditative yoga developed, in the last few centuries B.C.E., mantras were being used to calm and control the mind, says Rebecca Manring, associate professor of India studies and religious studies at Indiana University in Bloomington, Ind.

Modern mantras are still a sort of a prayer—for what we wish to be. They’re effective because they’re repetitive and simple, making them easy to turn into a habit. We don’t have to search for the positive thought to call up; we already have it.

People invoke mantras during times of stress, such as business launches, academic finals, first marathons, life-threatening illnesses. Some are just one word: “Breathe.” “Shine.” “Love.” Others are phrases: “This will pass.” “You’ve come this far, now push to go further.” Giana Crispell, a retired financial planner in San Diego, has used the phrase “never, never, never, never, never, never, never give up!” (inspired by a Winston Churchill speech) while working her way through college and graduate school and launching a financial-services firm; she’s also passed it along to her children.

Mark Leary, a professor of psychology and neuroscience at Duke University, repeatedly tells himself “I’m OK right now” when he’s worried about something in the future, such as the results of a medical test. Irwin Weinberg, a 69-year-old retired quality management consultant in Boca Raton, Fla., tells himself “QTL” (which stands for “Quality Time Left”) in difficult times, including when his wife was terminally ill last year, to remind himself not to waste time thinking about the negative and to focus on what makes him happy. Kathlene Carney, 55, a publicist in Point Richmond, Calif., begins repeating “good things always happen to me and good things always happen through me” as soon she feels a downward cycle of negative thinking coming on, whether it is prompted by work stress or worrying about global unrest.

Stephanie Freeman chose her mantra after a long bout of poor health which caused her to gain 50 pounds and lose most of her hair. When she felt unattractive and pitiful, she decided to change her thinking, adapting a line from a favorite song. She tells herself, “I’m a brick house! I’m mighty, mighty, just letting it all hang out!” “Yes the 1970s Commodores hit helped me time and time again to put a spin on what seemed like an endless battle,” says the 47-year-old professor who lives in Raleigh, N.C.

How can you choose the best mantra for you? Not just any clichéd motto—“Just do it!”—will do.

Picture yourself older and wiser. Now think about what advice this evolved version of yourself would most want to give you right now to make your life better. Write it down. And distill it into single word, phrase or short sentence. “Make sure that it rings true for you, that it makes you feel good, empowered, reassured, and hopeful,” says Ken Page, a licensed clinical social worker in New York City, who encourages his clients to create personal mantras.

Choose several. ‘Having one mantra can become monotonous or routine and it can lose its meaning,” says Lauren Myrick, a business consultant and life coach in Charlotte, N.C. But don’t have so many mantras that you have to struggle to recall them.

Keep it short. It needs to be easy to remember.

Make sure it is positive. But not unbelievable. “If it’s too positive, it can feel hokey—‘I’m good enough, smart enough and people like me,’” says Paul DePompo, a psychologist in Newport Beach, Calif. For example, telling yourself all is well when it clearly isn’t may not help. “Mantras that help build a healthy brain long-term are based in truth, logic and helpfulness,” Dr. DePompo says.

Trigger your mantra. Practice thinking about what’s bothering you and then saying your mantra. This will train your brain to call up the word or phrase as a habit when you are stressed.

I chose a new mantra recently, while texting with a friend. I am typically adventurous—I love to travel, scuba dive, race sailboats—but mentioned to him that I am starting to feel shy in personal relationships.
His response hit home: “Fortune favors the brave.”