I did not get to travel as a kid.  The minute I had the opportunity to begin traveling (and no, you don’t need a lot of money to travel), I was off.

Over the past 25 years, I have been all over the world backpacking, learning and growing.  Along with having some spectacular experiences, travel has helped me with my personal growth, deepened my relationships with my wife, kids and friends, and created memories that will last a lifetime.

Turns out the benefits don’t stop there. Travel can help you live a longer and healthier life as well.  Walt Winius, 87 years young, is an idol of mine.  He still travels the world and his mind is as sharp as ever.

Some notable health benefits of travel include:

As June Scott says in the article below: I believe in travel.  Yes, I do.

Rule #3 from my book The Fantastic Life: Build Your Resumes Every Year
I often refer to my work or relationships resume, but one of my favorite resumes to build is my travel resume. Every year I want to add new destinations to my list, checking off new cultures, experiences, and passports.

Why Travel May Be the Secret to a Longer Life 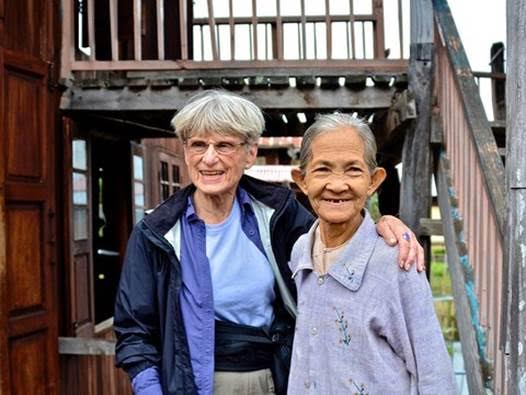 Just ask this 86-year-old who has been to over 87 countries—and shows no signs of stopping.

When 86-year-old June Scott is asked where she’s based, she responds: “This morning or in travel?”

Considering she’s visited all seven continents and over 87 countries, it’s a fair question. The Oak Brook, Illinois-based traveler just returned home from Palestine and Israel; before that, she was in Cuba; and in December, she slept in a pop-up tent in the world’s largest sand desert, the Arabian Peninsula’s Empty Quarter—often considered one of the least explored places on Earth. Last August? She and her family hiked sand dunes over 900 feet high, flew over the Skeleton Coast in a tiny plane, and kayaked with seals in Namibia.

But Scott isn’t just an active grandmother with a passport full of stamps. She’s also a participant in Northwestern University’s SuperAging study—a research project analyzing the brains of people who seem to be resistant to the detrimental memory changes all-too-often associated with aging.

As most of us age, our brains shrink, which leads to a decline in cognition (or thinking skills) the older we get. “Atrophy is thought to contribute in part to the moments of forgetfulness we experience with aging,” says Emily Rogalski, Ph.D., the director of the study. SuperAgers like Scott, however, lose less brain volume—one study found that over the course of 18 months, ‘normal’ agers lost volume in the cortex (the brain area linked to critical thinking) twice as fast as SuperAgers. In other words, Scott’s brain is considered younger than she is, with parts of it looking similar to the brains of people in their 50s.

So, what has travel got to do with it? It depends on who you ask.

Scott will tell you that her travels keep her youthful. “I’m a curious person,” she says. “I want to be a lifelong learner, and to me, travel makes life so much more interesting.”

Instead of renting a cottage in Michigan or Wisconsin, like many of their peers did while raising a family, Scott and her late husband spent summers exploring the U.S. National Parks with their three children. When her children were young, Scott stayed home, and then at age 40 became a teacher; but she’s never stopped traveling. Throughout her life, Scott has tracked gorillas in Rwanda and followed her family tree to Czechoslovakia. A particular point of pride: Through her travels, she’s seen all 17 species of penguins.

But are all SuperAgers world travelers? No. In fact, results from Northwestern University’s SuperAgers studies suggest that the only common denominators among SuperAgers seem to be their amazing memories and youthful brains.

Scott sits on a pack of ice beside a waddle of Emperor penguins near the Ross Sea, Antarctica.

However, anecdotally, researchers have pieced together another common thread: “Initial hints suggest SuperAgers tend to be socially active, including volunteering at homeless shelters, participating in church groups, playing cards, reading to young children, leading exercise groups, and of course some, like June Scott, are avid travelers,” says Rogalski.

It’s no secret that sociability is a trait that proves to be a crucial part of growing old. Not only do strong social connections help fend of issues like depression, known to steal years from a life, but as Rogalski explains, talking is taxing: “Conversations make your brain work.”

Melissa Gartenberg Livney, Psy.D., a geriatric psychologist at the University of Pennsylvania’s Perelman School of Medicine, points out that when people travel, they are typically doing so either with a partner, spouse, group of friends, or in some kind of organized fashion. “There’s a built in sense of community… As people get older and friends’ abilities may not be on par with theirs, traveling in a group format can help you connect with similar people,” she notes.

As for Scott? She has met friends all over the world; finding commonalities across oceans. “We may speak a different language, have different traditions, wear different clothes, have different faces, but we’re all human,” she says. “We want the same things.” She still writes letters back and forth with a woman she met in Saudi Arabia, and some of her best friends are people in their 50s. “Last year, I made a list of how many friends I have lost. I’ve lost 18 friends. It makes you realize we’re not immortal.”

According to Scott, who doesn’t like to repeat trips, her adventures “open her vistas.” It’s a point researchers agree with, as our brains thrive off of newness and challenge. “It was previously thought that we were born with a certain amount of neurons and that number only went down,” Rogalski says. “Now, we’re understanding that might not be the case.”

Neurogenesis—the formation of new neurons—is driven, in part, by new and novel experiences. “When you go to Iran, Dubai, India, or China and then read about these places in the news, everything makes more sense,” says Scott. “In a three-week trip, I know I don’t have the whole story, but I have more than I did.”

She’s fortunate, she notes, to have the means and the energy to fuel her sense of adventure. “If I don’t have tickets in my drawer, I feel like I am going into withdrawal.” Though she admits traveling the globe well into her 80s isn’t without its challenges. “Sometimes I think, ‘Have I bit off more than I can chew?’” she says. “You have to be flexible and lug your luggage through airports and walk miles and miles and take buses or trains.”

But the benefits outweigh the hardships: “Once you arrive, it makes up for everything. I believe in travel. I think more and more people should do it so we can be ambassadors for the world we live in.”

Currently, Scott’s busy creating a keynote program about her travels to Namibia that she’ll share with local schools, libraries, and retirement homes (she still works as a substitute teacher, too). But travel is never far out of sight for the octogenarian. Next on the cards? A trip to Ethiopia this fall, where she plans to explore rock churches and learn about the different tribes in the south. “It’s going to be an active walking experience,” she says. “So I thought, Well, the sooner the better. Yesterday, I got over 18,000 steps on my FitBit to prepare.”