I am dabbling in podcasts.  But this LIFEies is something I have just begun trying, and thought you might want to try it as well.  You’ve heard of speed reading but have you heard of speed listening? Podcast apps are now offering the ability to listen to episodes at up to 4x the normal rate. Here’s why:

If you are tight on your schedule (who isn’t?) then this might be a way to gain some knowledge at lightning speed.  More below from Ben Cohen and the Wall Street Journal.

Rule #7 from my book The Fantastic Life: Be Value Driven

Continuous education is one of my values. I am always looking for new ways to learn and grow. Whether its podcasts, reading, or watching videos, there’s always a new method out there to better yourself.

How Do Podcast Nuts Find the Time? They Listen at Chipmunk Speed 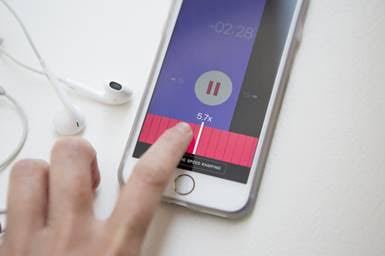 Jarod Reyes wanted to reduce his anxiety. His doctor suggested meditation, so he subscribed to a podcast to guide him toward a Zen state.

“Close your eyes,” the podcaster’s voice would intone languidly over instrumental music. “Take a slow, deep breath.” But something about it made him anxious. The episodes were too long; it was hard to focus.

He knew what he had to do. Now the 35-year-old web developer sets the podcast to run faster, forcing its hypnotherapist to make it snappy with her soothing thoughts. “On the exhale, allow yourself to settle in,” she hurries along at double speed. “Maybe roll your shoulders back. Or wiggle your hips a bit.”

How do people have so much time for so many podcasts? Some don’t. They speed-listen and knock out two, three, four podcasts in the time one usually takes.

Geoff Newman, 31, thought a colleague who told him about speed-listening was nuts. Then the London web developer and filmmaker tried 1.2 times normal speed, then 2x, then 2.5x. Now he’s comfortable at 3x.

It’s painful to consume his favorite tech and videogame podcasts at actual speed. “It sounds so strange,” he says. “Like they’re smoking lots of weed.”

Mr. Reyes trained himself to work and listen to “This American Life” simultaneously—then at double-speed. At times, in the car with his wife, a podcast comes on from his prior drive, he says, and “I think it freaks her out.”

The average podcast listener gets through five a week, says Edison Research, which studies media. People who listen most, the 21% squeezing in six or more, tend to listen fastest.

When ESPN anchor Rachel Nichols moved to Los Angeles last year, she discovered she could squeeze two full podcasts into her drive to and from work if she pushed their speed to as fast as 2.3x. Ms. Nichols proselytizes the joys of speed-listening on Twitter . “I like pushing the cause,” she says.

Ms. Nichols was a guest recently on “The Lowe Post,” a show hosted by ESPN colleague Zach Lowe, and she made a plea to the audience as soon as she was introduced: “I’m going to ask everyone to now go to their app and speed up the rest of this podcast.”

Mr. Lowe says: “It’s insane that anyone listens to podcasts at that speed.”

Pádraig Ó Cinnéide, co-founder of the podcast app Castro, agrees with Mr. Lowe. “We once got a request for 4x,” he says in an email, “from a (presumably) insane person.”

Castro still offers playback speeds only up to 3x.

A fourfold speedup sounds entirely sane to Max Deutsch, 24, who says he has speed-listened to 69 audiobooks this year. The faster the speed, he found, the more engaged he was. “That’s when I asked myself: I wonder how fast I could actually listen?”

The San Francisco tech-product manager, unable to find apps with speeds over 3x, created Rightspeed, a $2.99 app that accelerates podcasts in nearly unnoticeable 0.1x increments every two minutes. A one-hour podcast that begins at 2x, ends at 5x and takes 17 minutes.

“It’s sort of like the Roger Bannister, four-minute-mile effect,” Mr. Deutsch says. “Until you’re told it’s possible for a human to listen at this speed, you just decide you can’t.”

When Andy Mullan, a government employee in San Francisco, checks out a library book, he downloads the audio version. He listens at 3x and follows in print. Mr. Mullan, 32, says his reading consumption has increased and his comprehension has improved.

Hundreds of thousands of Audible listeners use higher speeds, according to the audiobook company’s data. Audible says speed-listeners prefer nonfiction but do binge on mysteries and thrillers.

“The ‘Game of Thrones’ guy,” Mr. Mullan says. “Oh my god. He speaks so slowly.” A daughter of the “guy,” 94-year-old Tony Award winner Roy Dotrice, said he wasn’t available for comment.

Mr. Mullan listens to podcasts more slowly, at 1.5x. “Fast enough so they’re a little faster,” he says, “but not so fast they sound like Alvin and the Chipmunks.”

Ben Carlson, 35, a Grand Rapids, Mich., portfolio manager, believes speed-listening may offer performance-enhancing benefits. When he began using podcasts on lunchtime runs, he found them so slow they nearly put him to sleep.

When he made them faster, “I felt like I was running faster,” he says. “I was more in sync with being sped up. Which is crazy. But I think there’s something to it.”

He did slow down for an interview with Silicon Valley venture capitalist Marc Andreessen, who spoke too fast. Mr. Andreessen declined to comment.

Andy Bowers finds speed-listening useful as chief content officer of the podcast network Panoply in Brooklyn, where it is his job to listen to podcasts. (The Wall Street Journal belongs to the Panoply network.) “I have to say very emphatically that I do not think it’s an insult in any way,” says Mr. Bowers, 53. “I think it’s actually a compliment that you want to find ways to continue to fit them into your day.”

It does feel sacrilegious, say several podcast listeners, to rush highly produced shows like “Serial” or “Radiolab.” The sound, pacing and silence are crucial.

Same for “Song Exploder,” in which musicians deconstruct their work. Its host, Hrishikesh Hirway, says he hears from listeners assuring him it is the only podcast they want to hear unaltered.

Mr. Hirway’s podcast is the rare show Mr. Reyes enjoys at normal speed. Any faster, he says, “would be almost disrespectful.”

There’s one smartphone button he won’t touch. “What I can’t figure out is why they have a ½x,” he says. “I can’t imagine a person who needs to listen to these things slower