Below is an article from the WSJ about Rafa Nadal and his Coach Uncle Toni.

Here are some key points:

– Family has the ability to push individuals farther than an outsider would.
– Character is just as important as talent.
– Your appetite for success is never ending as a champion and Coppola’s are champions.

Rule #17 from my book The Fantastic Life: Life is About Opportunity, Too
Coaches and mentors can bring unexpected opportunities. Nudging you in a new direction, introducing you to a new way of thinking, opening doors. When you have a coach, be open to acting on those opportunities.

For Rafael Nadal and His Uncle Toni, the Coaching Never Ends 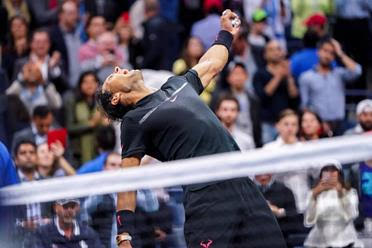 Rafael Nadal after his semifinal victory over Juan Martín del Potro. He will face Kevin Anderson in Sunday’s final.

Midnight was approaching on Friday. Rafael Nadal was safely back in a United States Open final after wearing down the dangerous Juan Martín del Potro, and the next generation of Nadals was eager to get back on the court.

As Nadal’s coach and uncle, Toni, stopped in the corridor outside the men’s locker room to answer a few of my questions, his two young sons, whipped their rackets out of their bags and raced up the hallway to the now-darkened Arthur Ashe Stadium.

“They want to play at night,” Toni Nadal said, chuckling.

In theory, this should be a nostalgic moment for all the Nadals, because, in theory, this is Toni Nadal’s last Grand Slam tournament as his nephew’s full-time coach.

Now the Nadals have the chance to finish on top with Rafael back at No. 1 and very much the favorite to win a 16th Grand Slam singles title when he faces 28th-seeded Kevin Anderson of South Africa in Sunday’s final.

But nostalgia is apparently more for outsiders at this stage.

“I am honestly not thinking about it being the last one,” Toni Nadal said. “I’m not in the beyond. I’m entirely in the present right now, very happy to be in the final and that Rafael is in another final. I’m not thinking about not being here next year. I’ll think about it next year when I’m in Majorca. Nostalgia is for then, not for now.”

Toni and Rafael have been a pair like no other in the modern game. Toni was Rafael’s first teacher, giving him his first lesson at age 3 on the Spanish island of Majorca that the Nadals still call home. Toni has remained Rafael’s mentor for the last 28 years as Rafael has become one of the greatest tennis players of all time.

Consider how many coaches Nadal’s rival Roger Federer has had along his trail to the very top: Peter Carter, Peter Lundgren, Tony Roche, Jose Higueras, Paul Annacone, Stefan Edberg and now Ivan Ljubicic with Severin Lüthi remaining the closest thing to a constant in the 36-year-old Federer’s later phase.

Toni Nadal will step down as Rafael Nadal’s full-time traveling coach at the end of this season.

But Toni and Rafael have gone through all the phases together — quite a feat considering how different a task it is for a coach to teach a player the fundamentals of the game and to help a player find the motivation and, to use one of Rafael’s favorite words, “solutions” once they have already reached No. 1.

“It’s not about my personal merit,” Toni Nadal said. “It’s a circumstance that came about because of family, nothing more than that.”

There is some truth in that. It is surely much harder to fire your uncle than to dismiss someone outside your family. Rafael does not pay Toni a salary directly; it comes from the family company run by Rafael’s father, Sebastian (the Nadals were prosperous long before Rafael became a tennis superstar).

But Toni has used his position and leverage to shape the person as well as the player, and if Rafael Nadal is still out there chasing down tennis balls in his early 30s with the same passion that he had in his early 20s, it is as much about character as it is about talent.

Even after all the matches won and miles run, he still looks hungry, and that is surely due in part to his uncle always making it clear that no matter how many French Opens or other big titles his nephew won, there was always more to do, more to refine, more to add, more to improve.

Rafael’s on-court attitude might be relentlessly upbeat, but the default mode for nephew and uncle off court is pessimism, which can sometimes seem like false modesty but has been there too long to be a facade. It also bears remembering that many of us were convinced Nadal’s grinding style of play and technique would mean a short career. Clearly, the uncle and nephew knew better.

“I’m interested, most of all, in the question of learning,” Toni Nadal, 58, said. “For me the only thing that makes me stand out from some other coaches is that when I go into the locker room, as I did just now, I might tell Rafa he played very well, but my idea is always what can we do to make him better, even better. I’m telling him, look at Federer, look at the way he’s playing. You need to be more at the net. You need to be more aggressive from the start, and this approach I’ve applied to everything in my own life. It’s a question of principle, really.

“Progress is what distinguishes humans from the rest of the animals on the planet. A lion. I think his behavior is the same for the last 5,000 years or however many years. Humans have improved, or at least the majority have, and that’s what makes us who we are. We are evolving. That’s the way it works, and that’s what I’ve managed to inculcate in Rafael. Sometimes he’s listened better than at other times, but there’s nothing more to life than that.”

When this season is over, Toni Nadal plans to live life with much less jet lag, to spend time with his family and to focus his professional energies on the Rafa Nadal Academy, which opened last year in Manacor.

His decision to step away from the tour became public in surprisingly awkward fashion in February, with Toni letting the news slip at a coaching conference in Italy before he had informed Rafael in person. He explained that his decision-making role had been gradually reduced through the years.

By then, the Nadals already had added Carlos Moya, the first tennis player from Majorca to reach No. 1, to the coaching team. Toni made it clear that if Moya were not so good at his job, he would not have entertained the idea of leaving his full-time traveling role.

“To coach a player from the start to the top is something you rarely see, not only in tennis but in sport nowadays,” Moya said Friday night. “The person who had the biggest impact on Rafa’s career is Toni, but I understand what he’s thinking. Now he has three kids. He has the academy, which is very important for Rafa, and he’s been traveling for so long.”

There may have been some bruised feelings, but there is no arguing with the results in 2017, which has been a throwback season in the men’s game and, against the odds and the currents, one of the finer seasons in Rafael Nadal’s remarkable career. He has come back from a wrist injury to win four tournaments, including his 10th French Open, and to reach the final of the Australian Open and now the U.S. Open.

“There’s no drama,” Rafael Nadal said Friday night as he looked ahead to the final. “Toni made his decision, and we go forward. For the academy, it will be a big help to have him there, and for me, this is another match. It’s not my last match with him. I keep repeating the same thing. Toni’s not going to live in another part of the world. He lives 100 meters from my house and works in the academy, where I’ll continue to be based. Above all, he’s my uncle. Nothing changes.”

He added: “I can only do what I have done all my career and nothing more: say thank you for everything.”

They have come such a long way together on the road to 15 major singles titles with a 16th very likely coming soon. For now, Rafael is the only Nadal with playing privileges in Ashe Stadium. Toni’s sons soon came racing back to the corridor after getting kicked off the court by a surprised security detail.

But who knows what might happen farther down the road?

“To be part of his life has been something incredible,” Toni said of Rafael. “I’m more thankful than proud.”