I have a simple LIFEies for you today.  Save money for emergencies.  A good rule of thumb is to have 6-8 months of living expenses set aside in liquid assets.

So, 80% of Americans cannot live without a paycheck for almost any period of time.  This needs to change.

You’ll thank yourself in the future.

Rule #5 from my book The Fantastic Life: Make Sacrifices
What hurts more, making a small sacrifice of your morning coffee today, or struggling to manage your responsibilities ten months from now after losing your job? Make sacrifices. It’s the only way to gain everything you want.

Most Americans have less than $1,000 in savings 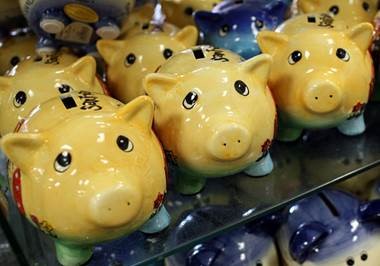 For the majority of Americans, these are empty.

Americans are living right on the edge — at least when it comes to financial planning.

Approximately 62% of Americans have less than $1,000 in their savings accounts and 21% don’t even have a savings account, according to a new survey of more than 5,000 adults conducted this month by Google Consumer Survey for personal finance website GOBankingRates.com. “It’s worrisome that such a large percentage of Americans have so little set aside in a savings account,” says Cameron Huddleston, a personal finance analyst for the site. “They likely don’t have cash reserves to cover an emergency and will have to rely on credit, friends and family, or even their retirement accounts to cover unexpected expenses.”

This is supported by a similar survey of 1,000 adults carried out earlier this year by personal finance site Bankrate.com, which also found that 62% of Americans have no emergency savings for things such as a $1,000 emergency room visit or a $500 car repair. Faced with an emergency, they say they would raise the money by reducing spending elsewhere (26%), borrowing from family and/or friends (16%) or using credit cards (12%). And among those who had savings prior to 2008, 57% said they’d used some or all of their savings in the Great Recession, according to a U.S. Federal Reserve survey of over 4,000 adults released last year. Of course, paltry savings-account rates don’t encourage people to save either. 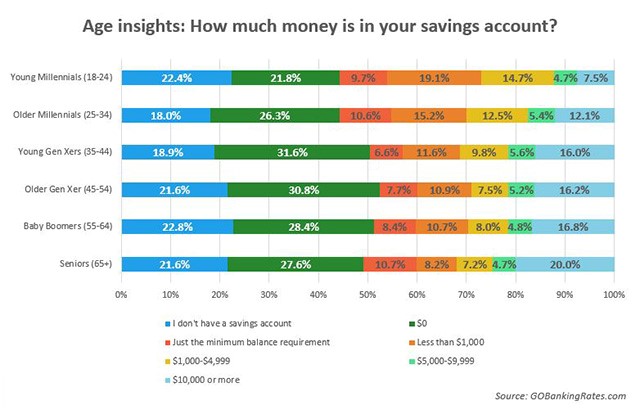 In the latest survey, 29% said they have savings above $1,000 and, of those who do have money in their savings account, the most common balance is $10,000 or more (14%), followed by 5% of adults surveyed who have saved between $5,000 and just shy of $10,000; 10% say they have saved $1,000 to just shy of $5,000. Just 9% of people say they keep only enough money in their savings accounts to meet the minimum balance requirements and avoid fees. But minimum balance requirements can vary widely and be hard to meet for some consumers. They can vary anywhere between $300 a month and $1,500 a month at some major banks.

Some age groups are less likely to have savings than others. Some 31% of Generation X — who are roughly aged 35 to 54 for the purpose of this survey — while being older and presumably more experienced with money than their younger cohorts, actually report a savings account balance of zero, which is the highest percentage of all age groups. Around 29% of millennials — aged 18 to 34 — and 28% of baby boomers — aged 55 to 64 — said they have no money in their savings account. Baby boomers (17%) and seniors aged 65 and up (20%) have the most money saved of any age group while less than 10% of millennials and approximately 16% of Generation X have $10,000 or more saved.