Skip to content
I am an achievement addict. I have been for all my life.  Is achievement the same as success?  Not sure but it is close enough for me to do some introspection and share my thoughts with you. I will use success and achievement interchangeably in this LIFEies. The Atlantic article by Arthur C. Brooks below talks about some people who choose success over happiness.  Let me break down some of my thoughts then you can read the article if you want to dive deeper into the topic.

—I believe living a Fantastic Life is multidimensional. We want (and are willing to work for) success in 3-5 areas in our lives.  I don’t think we can do more than that and still find excellence. Focus and achievement go hand in hand.

—Finally, living your fantastic life is YOUR call.  What success is for me is not what you want.  I love finding people who are living their best life inside their Unique Abilities. It amazes me how many different ways success can manifest.  I don’t want their life but I can truly appreciate their skills and commitment.  So make sure you think about what you want, what your skills are and your commitment level….then execute.

Rule # 1 from my book The Fantastic Life: Know Your Story- Will success bring you happiness? What does true success look like for you? These are questions only you can answer as you build your own unique Fantastic Life. It starts with knowing your story, your values, who you are, where you come from, and what you want.

‘Success Addicts’ Choose Being Special Over Being Happy 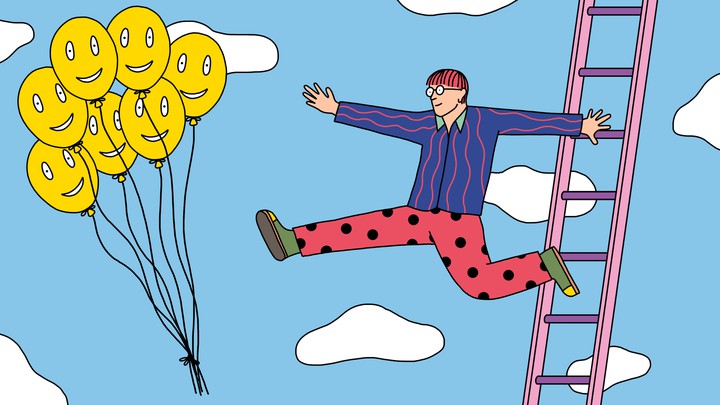 Maybe—but maybe not. It might well be the story of someone whose never-ending quest for more and more success leaves them perpetually unsatisfied and incapable of happiness.

Physical dependency keeps alcoholics committed to their vice, even as it wrecks their happiness. But arguably more powerful than the physical addiction is the sense that drinking is a relationship, not an activity. As the author Caroline Knapp described alcoholism in her memoir Drinking: A Love Story, “It happened this way: I fell in love and then, because the love was ruining everything I cared about, I had to fall out.” Many alcoholics know that they would be happier if they quit, but that isn’t the point. The decision to keep drinking is to choose that intense love—twisted and lonely as it is—over the banality of mere happiness.

Though it isn’t a conventional medical addiction, for many people success has addictive properties. To a certain extent, I mean that literally—praise stimulates the neurotransmitter dopamine, which is implicated in all addictive behaviors. (This is basically how social media keeps people hooked: Users get a dopamine hit from the “likes” generated by a post, keeping them coming back again and again, hour after miserable hour.)

But success also resembles addiction in its effect on human relationships. People sacrifice their links with others for their true love, success. They travel for business on anniversaries; they miss Little League games and recitals while working long hours. Some forgo marriage for their careers—earning the appellation of being “married to their work”—even though a good relationship is more satisfying than any job.

Many scholars, such as the psychologist Barbara Killinger, have shown that people willingly sacrifice their own well-being through overwork to keep getting hits of success. I know a thing or two about this: As I once found myself confessing to a close friend, “I would prefer to be special than happy.” He asked why. “Anyone can do the things it takes to be happy—going on vacation with family, relaxing with friends … but not everyone can accomplish great things.” My friend scoffed at this, but I started asking other people in my circles and found that I wasn’t unusual. Many of them had made the success addict’s choice of specialness over happiness. They (and sometimes I) would put off ordinary delights of relaxation and time with loved ones until after this project, or that promotion, when finally it would be time to rest.

But, of course, that day never seemed to arrive.

The desire for success may be inherent to human nature. The great American psychologist William James once noted, “We are not only gregarious animals, liking to be in sight of our fellows, but we have an innate propensity to get ourselves noticed, and noticed favorably, by our kind.” And success makes us attractive to others (that is, until we ruin our marriages).

But specialness doesn’t come cheap. Apart from some reality-TV stars and other accidental celebrities, success is brutal work, and it requires sacrifices. In the 1980s, the physician Robert Goldman famously found that more than half of aspiring athletes would be willing to take a drug that would kill them in five years in exchange for winning every competition they entered today, “from the Olympic decathlon to the Mr. Universe.” Later research found that up to 14 percent of elite performers would accept a fatal cardiovascular condition in exchange for an Olympic gold medal—still a shockingly high number, in my estimation.

We can find this choice in ancient myth, as well. In Homer’s Iliad, Achilles must decide whether to fight in the Trojan War—promising certain physical death but a glorious legacy—or return to his home to live a long and happy life with his loved ones but die in obscurity. He describes his choice thusly:

That two fates bear me on to the day of death.

If I hold out here and I lay siege to Troy,

my journey home is gone, but my glory never dies.

If I voyage back to the fatherland I love,

my pride, my glory dies…

Unfortunately, success is Sisyphean (to mix my Greek myths). The goal can’t be satisfied; most people never feel “successful enough.” The high only lasts a day or two, and then it’s on to the next goal. Psychologists call this the hedonic treadmill, in which satisfaction wears off almost immediately and we must run on to the next reward to avoid the feeling of falling behind. This is why so many studies show that successful people are almost invariably jealous of people who are more successful.

They should get off the treadmill. But quitting isn’t easy for addicts. For people hooked on substances, withdrawal can be an agonizing experience, both physically and psychologically. Anxiety and depression are very common after one quits alcoholic drinking, for example. Indeed, the novelist William Styron famously cited the cessation of his lifelong heavy drinking as part of the onset of the clinical depression he chronicled in his book Darkness Visible: A Memoir of Madness. Some chalk this up to loneliness in the absence of alcohol—remember, it’s a relationship.

Success addicts giving up their habit experience a kind of withdrawal as well. Research finds that depression and anxiety are common among elite athletes after their careers end; Olympic athletes, in particular, suffer from the “post-Olympic blues.” I saw this withdrawal all the time in my years as the president of a think tank in Washington, D.C. Prominent people in politics and media would step back from the limelight—sometimes of their own volition, sometimes not—and suffer mightily. They talked of virtually nothing but the old days. Many suffered from depression and anxiety.

“Unhappy is he who depends on success to be happy,” wrote Alex Dias Ribeiro, a former Formula 1 race-car driver. “For such a person, the end of a successful career is the end of the line. His destiny is to die of bitterness or to search for more success in other careers and to go on living from success to success until he falls dead. In this case, there will not be life after success.”

American culture valorizes overwork, which makes it easy to slip into a mindset that can breed success addiction. But if you’ve seen yourself in my description, don’t lose hope. There is plenty you can do to retrain yourself to chase happiness instead of success, no matter where you are in your life’s journey. Let me suggest that you consider three steps, whether you are at the peak of your career, trying to work your way up the ladder, or looking at success in the rearview mirror.

The first step is an admission that as successful as you are, were, or hope to be in your life and work, you are not going to find true happiness on the hedonic treadmill of your professional life. You’ll find it in things that are deeply ordinary: enjoying a walk or a conversation with a loved one, instead of working that extra hour, for example. This is extremely difficult for many people. It feels almost like an admission of defeat for those who have spent their lives worshipping hard work and striving to outperform others. Social comparison is a big part of how people measure worldly success, but the research is clear that it strips us of life satisfaction.

The second step is to make amends for any relationships you’ve compromised in the name of success. This is complicated, obviously. “Sorry about choosing tedious board meetings—which I don’t even remember now—over your ballet recitals” probably won’t get the job done. More effective is simply to start showing up. With relationships, actions speak louder than words, especially if your words have been fairly empty in the past.

The last step is to find the right metrics of success. In business, people often say, “You are what you measure.” If you measure yourself only by the worldly rewards of money, power, and prestige, you’ll spend your life running on the hedonic treadmill and comparing yourself to others. I suggested better metrics in the inaugural “How to Build a Life” column, among them faith, family, and friendship. I also included work—but not work for the sake of outward achievement. Rather, it should be work that serves others and gives you a sense of personal meaning.

Success in and of itself is not a bad thing, any more than wine is a bad thing. Both can bring fun and sweetness to life. But both become tyrannical when they are a substitute for—instead of a complement to—the relationships and love that should be at the center of our lives.