Skip to content
Part of the Fantastic Life is staying physically healthy, which means being active in some way, shape, or form. I was an ultra-marathon runner for years before becoming a long-distance backpacker. When the pandemic hit and limited my ability to travel, and my backpacking partner suffered an injury, I had to change my ways.  I started hiking and backpacking solo (Read: Alone Time). I looked where I could make some positive change in my life.

Let’s face it, we all get busy. We all have days where we can’t fit a long workout into our schedule. So what’s the minimum we need to do?

– Cardio – Can’t squeeze in a run or walk every day? Increase your mileage and speed on the days you do run or walk. Or measure output, like heart rate and calories, and find another cardio workout that’s equivalent. I recently started using a Peloton and have found I can get the same cardio output in an hour that I do on a long hike.

– Weights – If you have to reduce your frequency and volume, studies found you can still maintain your strength if you maintain the intensity of your workouts. This isn’t the same as gaining strength, but you won’t lose muscle mass if you’re intentional about your intensity.

– Routine  -I increased my morning routine and have doubled the reps and exercises over the past year.  This one thing now gets my day going where I KNOW I have already got a nice workout in.

The bottom line is there are no excuses for falling out of shape. Life is busy, but you can maintain your fitness every week if you are intentional with your workouts.

Rule # 8: Use the 2% Rule
When you feel crunched for time, consider how you can add just 2% more to your workout. Even that small percentage can make a huge difference over time.

What`s the Minimum Dose of Training to Stay Fit? 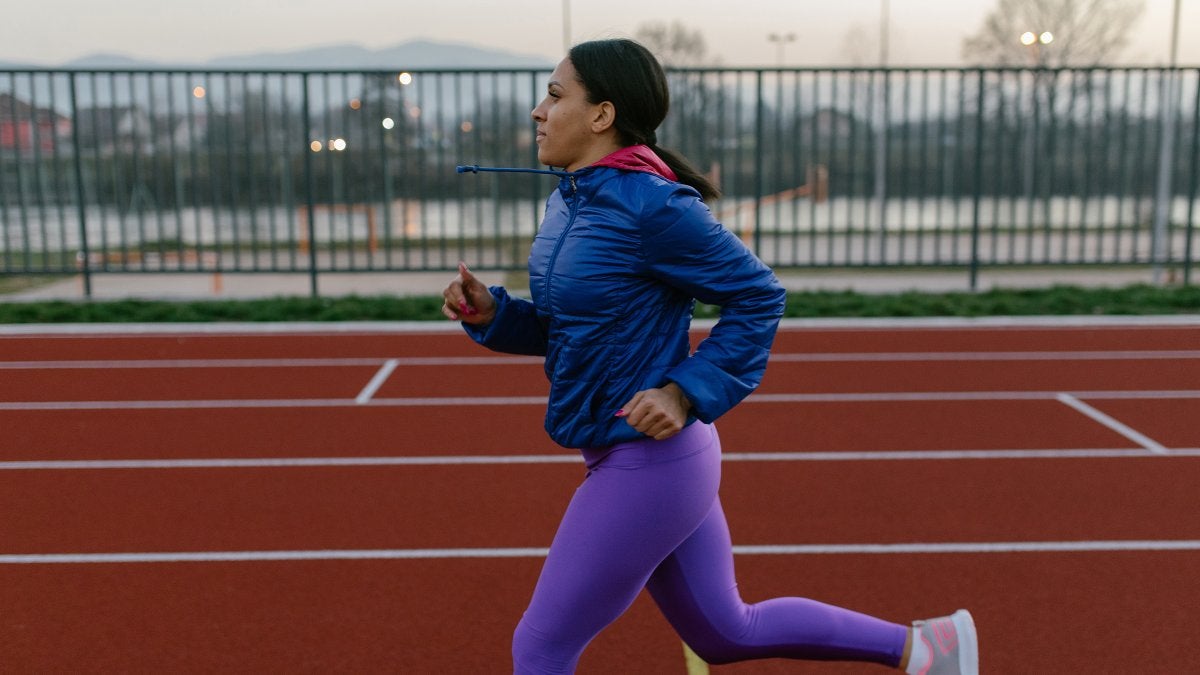 My college coach used to assign us a week of complete rest every November, after the conclusion of the cross-country season. But one of my teammates, an exercise science student, discovered the research of Robert Hickson, who did some classic studies in the early 1980s on maintaining fitness with reduced training. So, during our yearly week of sloth and bacchanalian revels, we would sneak out for two 30-minute bouts of hard running, hoping that would allow us to be both well-rested and still fit when we started training for indoor track.

Life as a grown-up is more complicated, and the reasons for temporarily reducing training are sometimes considerably more pressing—like a pandemic, say. But the question endures: what’s the smallest dose of training you can get away with temporarily while staying mostly fit? It’s particularly relevant for military personnel, whose ability to train while on deployment is often severely constrained, which is why a group of researchers at the United States Army Research Institute of Environmental Medicine, led by Barry Spiering, has just published an interesting review of the “minimum dose” literature in the Journal of Strength and Conditioning Research.

The review addresses three key training variables: frequency (how many days per week), volume (how long is your endurance workout, or how many sets and reps do you lift), and intensity (how hard or how heavy). It only includes studies in which the subjects reduced their training for at least four weeks, to distinguish it from research on tapering before big competitions—although some of the conclusions are similar. And it’s focused on athletic performance, not weight loss or health.

The main conclusions about endurance are still based on those Hickson studies from the early 1980s, with a bit of confirmation from more recent studies. Hickson’s basic design was to put volunteers through ten weeks of fairly hellish training, involving six days a week of 40 minutes of cycling or running at intensities that reached 90 to 100 percent of max heart rate by the end. Then, for another 15 weeks, they reduced either the number of weekly sessions (to two or four), the duration of sessions (to 13 or 26 minutes), or the intensity of the sessions (to 61 to 67 percent or 82 to 87 percent of max heart rate).

Here’s the graph that got my college teammate so fired up, from Hickson’s 1981 study: 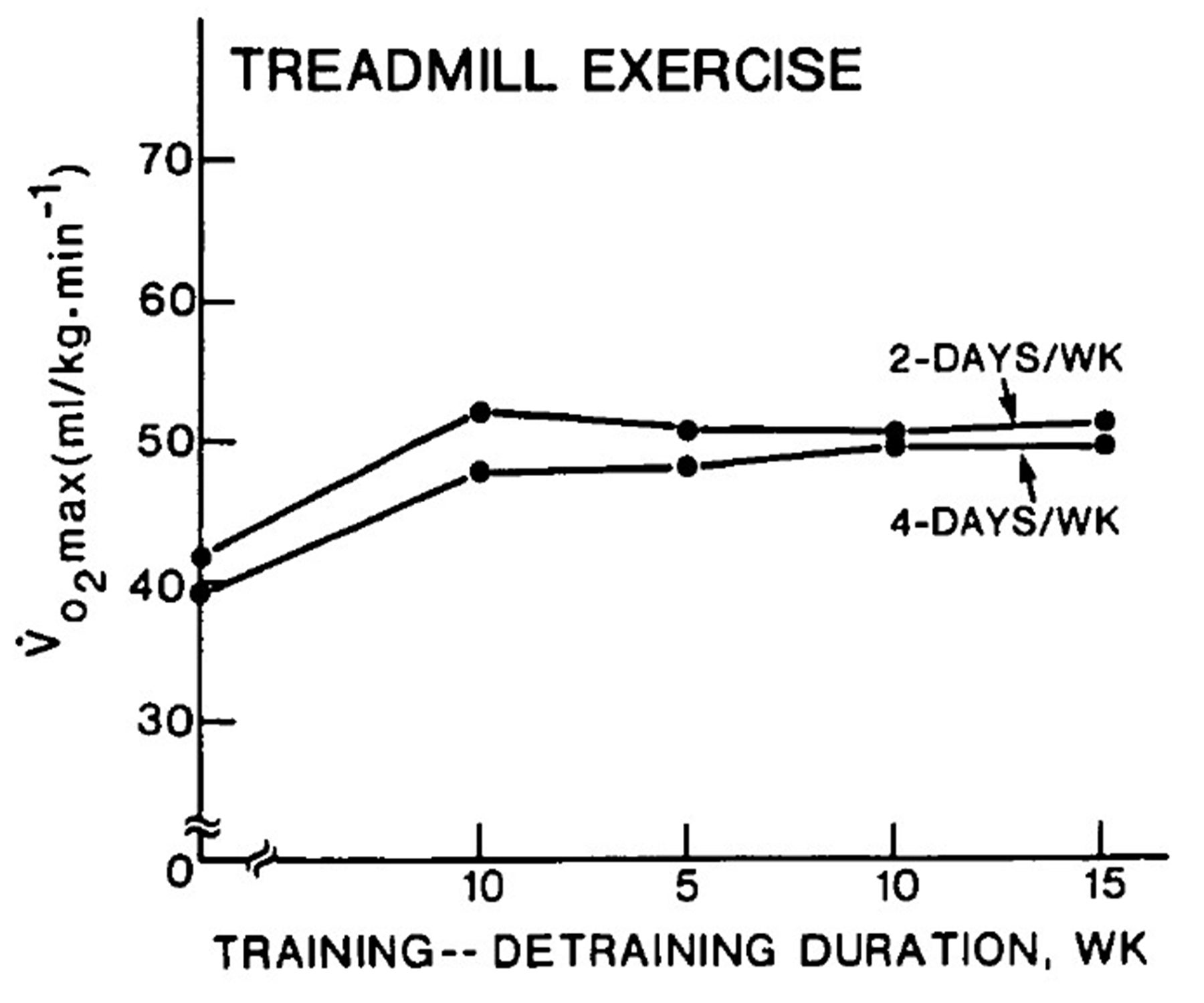 The vertical axis shows VO2 max, a measure of aerobic fitness. On the horizontal axis, you have baseline pre-training values on the left, for subjects who were recreationally active but untrained. After the ten-week period of hard six-day-a-week training, they’ve increased VO2 max by a very impressive 20 to 25 percent. Then, for the next 15 weeks, their VO2 max just stays at the new value, regardless of whether they drop down to only two or four days a week.

The overall conclusion of the new review, then, is that you can get away with as few as two sessions a week as long as you maintain volume and intensity of your workouts. But they caution that maintaining your VO2 max isn’t the same as maintaining your ability to perform long-duration endurance activities. Don’t expect to run your best marathon after a few months of twice-a-week training: your legs, if nothing else, won’t be able to handle it.

The picture was similar when Hickson’s volunteers reduced the duration of their training sessions to 13 or 26 minutes (i.e. reducing their baseline duration by one third or two thirds). Once again, VO2 max gains were preserved for 15 weeks. This study also included tests of short (~5-minute) and long (~2-hour) endurance. Short endurance was preserved in both groups, but the 13-minute group got worse in the two-hour test.

The third and final variable that Hickson manipulated was intensity—and here, finally, we get confirmation that training does matter. Dropping training intensity by a third (from 90 to 100 percent of max heart rate to 82-87 percent) led to declines in VO2 max and long endurance; dropping it by two-thirds (to 61 to 67 percent) wiped out most of the training gains. The takeaway: you can get away with training less often, or for shorter durations, but not with going easy.

There are a few important caveats here. Most notably, we’re drawing these conclusions based mostly on one specific, unusual, and probably unsustainable training protocol: hammering six days a week. If you have a more balanced training program that mixes hard and easy training, does it take more or less training to maintain fitness? It’s not obvious.

Also, the subjects in Hickson’s studies weren’t trained athletes or military personnel. If you’ve been training for years, you accrue some structural changes (a bigger heart and more extensive network of blood vessels, for example) that presumably take longer to fade away. Conversely, you probably reach a higher level of absolute fitness, which might fade away more quickly. One of the co-authors of the new review is Iñigo Mujika, a physiologist and coach at the University of the Basque Country in Spain who is among the world’s leading experts in tapering, in which athletes try to reduce their training enough to rest and recover for a few weeks without losing fitness before a big race. In tapering studies, athletes can reduce their training frequency by about 20 percent and their volume by 60 to 90 percent and maintain fitness as long as they keep their intensity high. That’s one good reality-check that suggests Hickson’s findings about the importance of intensity make sense.

The literature on resistance training is much more varied, which makes for a more complicated picture but hopefully more reliable conclusions. Surprisingly, the overall pattern turns out to be pretty similar to endurance training. You can reduce both the frequency and volume of workouts as long as you maintain the intensity, and you’ll preserve both maximum strength and muscle size for several months.

For exercise frequency, several studies find that even training just once a week is sufficient to maintain strength and muscle size. That fits with the conclusions of a study I wrote about recently that demonstrated impressive strength gains on a simple once-a-week routine. The exception is in older populations: for adults older than 60, there’s a bit of evidence that twice-a-week sessions are better at preserving muscle. There’s a similar picture for training volume: one set per exercise seems to be sufficient for younger populations, but older people may need two sets.

It’s worth noting that maintaining your existing strength is not the same as gaining strength: this review focuses on the minimum dose, not the optimal dose. Even in the broader strength training literature, there’s quite a bit of disagreement about how many sets or how many workouts per week it takes to fully max out your gains. But the basic finding here is that one set a week per exercise (or maybe a bit more for older adults) is probably enough to tread water for a while, as long as you don’t decrease how hard you lift. The review suggests aiming to approach failure by the end of each set, or at least to not decrease intensity compared to what you usually do.

In a perfect world, you’ll never need to apply any of this. But things happen, whether it’s related to work, travel, family, or global health. Over the years, as my own training has waxed and waned depending on the circumstances, the one non-negotiable element has remained a weekly tempo run—the spiritual descendant of those Hickson-inspired post-cross-country hammer sessions. It’s a shock to the system when my training has been patchy, but if that’s the minimum effective dose that ensures I never get truly out of shape, then I’m happy to swallow it.