by Craig Coppola on August 7, 2020 in Business, Goals, Self-Improvement

I have +-5,000 LinkedIn connections. We have an extensive +-12,000 contacts in our database at Coppola-Cheney.  LIFEies goes to over 25,000 people weekly.  My Commercial Real Estate Narrative goes to over 35,000 weekly.  Why am I sharing all this?

The number one predictor of career success is working with a large open network. While the article below was written years ago, the premise is even more important today.  Social networks have closed ourselves off from others. If we want career success… Open up, get out there, share.  Why?

—You will get a more accurate view of the world. I have said traveling the world is one of the best ways to see the world as it is — read my previous LIFEie on travel here.

—One key skill that is sorely needed today is people being a link between groups.  Can we serve as intermediaries or will we simply yell louder? By the way, that is not an effective way to connect with others.

—You’ll get new, better ideas.  I have been a trailblazer at Coppola-Cheney because of this one thought.  I get ideas from everyone and every place.  I try to grow daily.

Let me finish with this thought.  LinkedIn, blogs, narratives, etc. is me talking to you. But making personal calls, meeting with people, going to seminars, traveling…THAT is the way to make a REAL network.

Rule #3 from my book The Fantastic Life: Build Your Resumes Every Year
Have you taken a look at your relationships resume lately? What relationships are you proud of? Where are you lacking? Work relationships? Connections outside immediate friends and family? Work on building your network.

The No. 1 Predictor Of Career Success According To Network Science

It has been over three years since Steve Jobs died.

Each has celebrated his legacy and aimed to share the secrets he used to build the largest company in the world; things like attention to detail, attracting world-class talent and holding them to high standards.

We think we understand what caused his success.

We dismiss usable principles of success by labeling them as personality quirks.

What’s often missed is the paradoxical interplay of two of his seemingly opposite qualities; maniacal focus and insatiable curiosity. These weren’t just two random strengths. They may have been his most important as they helped lead to everything else.

Jobs’ curiosity fueled his passion and provided him with access to unique insights, skills, values, and world-class people who complemented his own skillset. Job’s focus brought those to bear in the world of personal electronics.

I don’t just say this as as someone who has devoured practically every article, interview, and book featuring him.

I say this as someone who has interviewed many of the world’s top network scientists on a quest to understand how networks create competitive advantage in business and careers.

The Simple Variable That Explains What Really Causes Career Success

In December of 2013, I interviewed one of the world’s top network scientists, Ron Burt. During it, he shared a chart that completely flipped my understanding of success. Here is a simplified version: 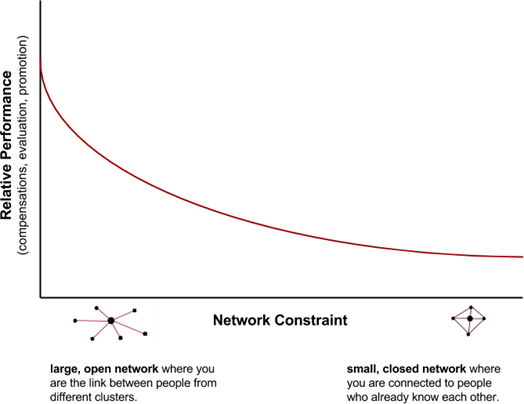 The bottom line? According to multiple, peer-reviewed studies, simply being in an open network instead of a closed one is the best predictor of career success.

In fact, the study shows that half of the predicted difference in career success (i.e., promotion, compensation, industry recognition) is due to this one variable.

Do you ever have moments where you hear something so compelling that you need to know more, yet so crazy that you’d have to let go of some of your core beliefs in order to accept the idea?

This was one of those moments for me. Never in all of the books I had read on self-help, career success, business, or Steve Jobs had I come across this idea.

I wondered, “How is it possible that the structure of one’s network could be such a powerful predictor for career success?

How A Closed Network Impacts Your Career

Most people spend their careers in closed networks; networks of people who already know each other. People often stay in the same industry, the same religion, and the same political party. In a closed network, it’s easier to get things done because you’ve built up trust, and you know all the shorthand terms and unspoken rules. It’s comfortable because the group converges on the same ways of seeing the world that confirm your own.

To understand why people spend most of their time in closed networks, consider what happens when a group of random strangers is thrown together:

David Rock, the founder of the Neuroleadership Institute, the top organization helping leaders through neuroscience research, explains the process well:

The Surprising Power And Pain Of Open Networks

People in open networks have unique challenges and opportunities. Because they’re part of multiple groups, they have unique relationships, experiences, and knowledge that other people in their groups don’t.

This is challenging in that it can lead to feeling like an outsider as a result of being misunderstood and under-appreciated because few people understand why you think the way you do. It is also challenging, because it requires assimilating different and conflicting perspectives into one worldview.

In one of my all-time favorite movies, The Matrix, the main character, Neo, is exposed to a completely new world. Once he is, he can’t go back. He’s an outsider in the new group, and he’s an outsider in his old life. He’s had an experience that everyone he’s ever met would never understand. This same phenomenon happens when we enter new worlds of people.

On the other hand, having an open network is a huge opportunity in a few ways:

As a result of pursuing his curiosity in different fields throughout his life, Steve Jobs developed an extremely unique perspective, skillset, and network; one that no one else in the computer industry had. He turned these unique advantages into the largest company in the world by having a razor sharp focus. Within Apple, he cut out people, products, and systems that weren’t world-class.

Many are quick to label parts of Steve Jobs’ life as the ‘lost’ or ‘wilderness’ years. However, when we view his life in retrospect, we see that his diversions were critical to his success.

What is labeled as the magic of Steve Jobs or the quirks of his character become replicable principles we can all follow.

It is from this vantage point that we can begin to understand the following quote from a Steve Jobs interview for Wired in 1995:

Creativity is just connecting things. When you ask creative people how they did something, they feel a little guilty because they didn’t really do it, they just saw something.

Unfortunately, that’s too rare a commodity. A lot of people in our industry haven’t had very diverse experiences.

So they don’t have enough dots to connect, and they end up with very linear solutions without a broad perspective on the problem. The broader one’s understanding of the human experience, the better design we will have.

Throughout human history, all societies including our own have created myths that share one common element, the hero’s journey.

Here’s what the journey looks like according to Joseph Campbell, the originator of the term…

Things are going great. You feel normal and fit in. Then something happens, and you change. You start to feel like an outsider in your own culture. You hide parts of yourself to fit in, but that doesn’t help. You feel called to leave and fulfill part of yourself, but that has a lot of uncertainty. So, you hesitate at first.

Finally, you take the plunge. You go through difficult times as you’re learning to navigate the new world. Finally, you overcome the challenges. Then, you go back to your old culture and have a huge impact because you share the unique insights you’ve learned.

The hero’s journey myth is embedded in everything from our society’s classic movies (i.e., Star Wars) to the heroes we glorify (i.e., Steve Jobs), because it hits on core parts of the human experience.

The field of network science shows us two things. (1) The hero’s journey is the blueprint for creating career success. (2) We can all be heroes. It just takes a little faith as you follow your heart and curiosity into unknown worlds. As Steve Jobs said, “You can’t connect the dots looking forward; you can only connect them looking backwards. So you have to trust that the dots will somehow connect in your future. ”