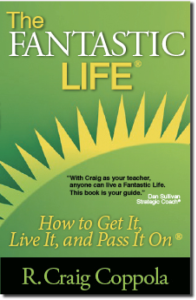 If you could live the life of your dreams, what would it look like? More importantly, how would you make that dream come true? Craig Coppola asked himself these questions years ago when, thanks to his seven-day work weeks, his personal passions and goals were falling by the wayside. His company was doing well, and he was living a good enough life, but he wasn’t fulfilled. Something had to change. What followed was a journey of discovery and growth that led him to figure out a way to do anything he wanted. Along the way, Craig built several successful businesses, won a Tae Kwon Do world championship, ran over eighty marathons and ultramarathons, spent thousands of hours coaching his kids’ teams, donated time to the community, and much more. It sounds superhuman, but it’s not. It’s just following the 18 rules for living a Fantastic Life. “If I can do it, you can too,” says Craig. In The Fantastic Life, Craig walks you through each rule and encourages you to make them part of your life. You’ll be surprised at what you will achieve.