by Craig Coppola on March 12, 2018 in Meditation, Self-Improvement, Technology

We talk about shutting down, taking time off, and getting away from technology.  Now you can name it:  A Shultz Hour.  See the NYT article below that Mike Welborn sent me.

I have been putting ‘thoughtful time’ (time for reflection) into my calendar for over two years but I rarely take it.  Maybe this renaming and redoubling my efforts will create the habit I want and I think we all need.

Take time each week for yourself.  No technology. Take a Shultz Hour.

Rule #16 from my book The Fantastic Life: Don’t Waste Time
Have you ever calculated how much time you waste on technology? Between social media, emails, and Netflix, where is your time going? And where could your time be better spent?

You’re Too Busy. You Need a ‘Shultz Hour.’ 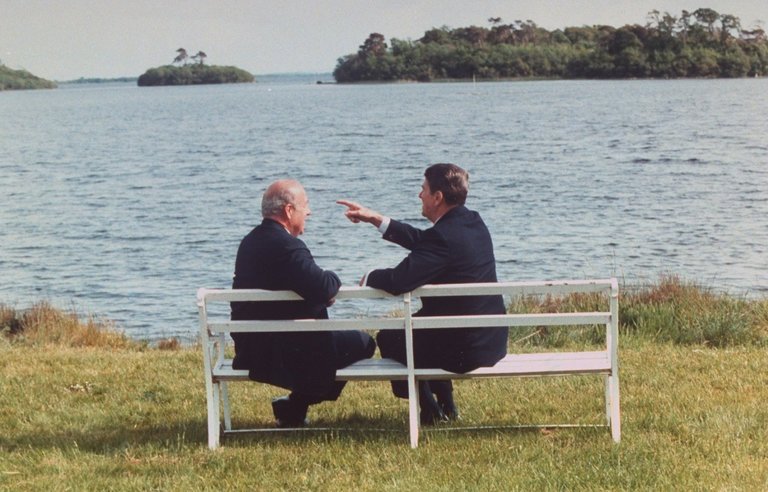 George Shultz sharing a quiet moment with Ronald Reagan in Ireland in 1984.

When George Shultz was secretary of state in the 1980s, he liked to carve out one hour each week for quiet reflection. He sat down in his office with a pad of paper and pen, closed the door and told his secretary to interrupt him only if one of two people called:

“My wife or the president,” Shultz recalled.

Shultz, who’s now 96, told me that his hour of solitude was the only way he could find time to think about the strategic aspects of his job. Otherwise, he would be constantly pulled into moment-to-moment tactical issues, never able to focus on larger questions of the national interest. And the only way to do great work, in any field, is to find time to consider the larger questions.

The psychologist Amos Tversky had his own version of this point. “The secret to doing good research is always to be a little underemployed,” Tversky said (as Michael Lewis describes in his latest book). “You waste years by not being able to waste hours.”

Likewise, Richard Thaler, the great behavioral economist and a Tversky protégé, self-deprecatingly describes himself as lazy. But Thaler is not lazy, no matter how much he may insist otherwise. He is instead wise enough to know that constant activity isn’t an enjoyable or productive way to live.

These days, however, it is a very tempting way to live. It can be hard to live any other way, in fact. We carry supercomputers in our pockets and place them next to us as we sleep. They’re always there, with a new status update to be read, a new photograph to be taken, a new sports score or Trump outrage to be checked.

Even before smartphones, this country’s professional culture had come to venerate freneticism. How often do you hear somebody humble-brag about how busy they are? The saddest version, and I’ve heard it more than once, is the story of people who send work emails on their wedding day or from the hospital room where their child is born — and are proud of it.

Our society, or at least the white-collar portions of it, needs some more of Thaler’s laziness and Shultz’s reflection time. They are the route to meaningful ideas in any almost any realm: personal relationships, academic papers, policy solutions, diplomatic strategies, new businesses. I find it striking that new-business formation has declined over the last 15 years, despite (or perhaps partly because of) the digital revolution.

My goal with this column is to persuade you to add a Shultz Hour, or something like it, to your week.

I’ve just begun to do so. I have committed to carving out an hour each week with no meetings, no phone calls, no email, no Twitter, no Facebook, no mobile alerts and no podcasts. Sometimes, I plan to spend the hour sitting down, as Shultz did, and other times taking a stroll. I keep a pen and paper with me and have set my phone to ring only if my wife calls. (My boss can’t start a war, so I’m willing to ignore him for an hour.)

The fact it felt hard to commit to a full hour was a sign of my need to do so. Like many people, I’m overly connected. I have confused the availability of new information with the importance of it. If you spend all your time collecting new information, you won’t leave enough time to make sense of it.

The science of the mind is clear about this point. Our brains can be in either “task-positive” or “task-negative” mode, but not both at once. Our brain benefits from spending time in each state.

Task-positive mode allows us to accomplish something in the moment. Task-negative mode is more colloquially known as daydreaming, and, as Daniel J. Levitin of McGill University has written, it “is responsible for our moments of greatest creativity and insight, when we’re able to solve problems that previously seemed unsolvable.”

Whether you decide a Shultz Hour makes sense for you, I’d encourage you not to fool yourself into thinking that you can easily change your habits in little ways here and there. The ubiquity of smartphones, together with our culture of celebrating busyness, makes ad hoc approaches difficult. You are much more likely to carve out time for strategic thinking by making concrete changes to your habits.

Wake up to an alarm clock rather than a phone, to collect your thoughts at the start of each day. While you’re driving, put your phone out of reach, mostly for safety, but also to let your mind wander at red lights.

Around the house, hide your phone — in a backpack, a drawer or another room — for set periods of time, as Sherry Turkle of M.I.T. recommends. Or carve out a few hours each week when no one in your house can check a phone. The filmmaker Tiffany Shlain and her family do so for an entire day — a “technology shabbat.”

If you remember my recent column on sugar, this advice may sound familiar. Like sugar, technology makes life more enjoyable. But it’s better in moderation, and modern life pushes us toward excess.